First up, the important bit. Ignore the critics; this is a good movie. If you are a sci-fi fantasy fan, pay your respects to one of the godfathers of the genre, Edgar Rice Burroughs, and see the movie. The plot is well thought out and the special effects are first rate. You will not be disappointed.

Next: full disclosure. I began reading Marvel comics at 10, and discovered science fiction a little later as a teenager. In my lifetime of exposure to these genres I somehow managed to avoid the progenitor of it all, John Carter of Mars, created nearly a century ago. Until, that is, a few weeks ago when I stumbled upon a beautifully illustrated hardcover volume of the first three novels on a bargain table in Barnes & Nobles. I had just finished the book days before seeing the movie. Since I have not read all eleven John Carter (original) novels, I am uncertain as to whether elements in the movie that aren’t in either of the first three books are inventions for the movie or things revealed in the later books. 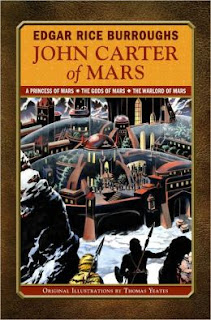 The movie is loosely based on the first book in the series, “The Princess of Mars.” All the main characters are present: Tars Tarkus, Jeddak of the Tharks, Dejah Thoris, the Princess of Helium and Carter’s love interest, her father Tardos Mors, Jeddak of Helium, Kantos Kan, an ally, the villain Sab Than, Jeddak of Zadonga, and the master villain Matai Shang, a Thern, who is introduced in the second book, “The Gods of Mars.”  A small part of the storyline from this book is brought into the movie.

The story follows “Princess” in only the broadest brushstrokes. The villains from the second book, the Therns, are brought into the story, and have been upgraded from one of the several Barsoomian races to cosmic proportions, including the ability to shapeshift. The primary conflict between the red men of Helium and those of Zadonga is consistent with “Princess,” as is the alliance with the Tharks owing to Carter’s winning ways with the savage race of 6-limbed green-skinned warriors.

The writers have done an excellent job of fashioning a modified story line that includes these plot lines and works very well as a movie.

John Carter of Mars inspired talented men of various walks of life, from Jack Kirby to George Lucas to physicist Carl Sagan. He may very well have been the first sci-fi fantasy superhero. Similarities of the various Barsoomian names with some in Star Wars have already been noted.  I discovered that Lockjaw, the family pet of Jack Kirby’s Inhumans, was most likely inspired by Carter’s pet Calot, Woola.

Now to the criticisms. Edgar Rice Burroughs’ writing is muscular and engaging. His protagonist was an injun’-fighting, adventure-seeking individualist, as well as a southern gentleman. I would have preferred the character to have been scripted more consistent with ERB’s writing.

The opening sequence of the book which leads to Carter’s miraculous, and (in the book) unexplained, voyage to Mars results from a fight with wild, villainous indians.  Consistent with political correctness, this sequence of events has been “corrected” for the movie. The native Americans are no longer a guilty party in this insignificant detail of the story.

Also PC’d-up for the movie is the damsel in perpetual distress, Dejah Thoris. Like Thor’s love, Jane Foster, who was promoted from his alter-ego’s nurse in the comic books to the most brilliant astro-physicist on earth for the movie, Princess Dejah Thoris is now also a warrior scientist, “Professor Thoris.”  She is the only scientist on Helium who is on the threshold of discovering the all-powerful ninth ray, and someone whose sword-fighting skills are more than a match for the martial abilities of the hordes of fierce enemy Zadongans.

It’s unfortunate that such ‘gendernorming’ is apparently mandatory in the current climate.  I guess the notion of a helpless woman requiring the strength, heroism—not to mention love—of a muscular, chivalrous stand-up dude is just too ... unsettling for some.

All in all, despite the minor flaws, John Carter is a winner. I hope movie-goers aren’t deterred by negative reviews, many written by people who have never read the books and  may not understand that elements of the story that seem clichéd are in fact the original source of the clichés. I hope to see John Carter become a franchise. I look forward to seeing the next installment of the story, which will reveal more about the Therns, the mysterious “Gods of Mars.”