Alyce LaViolette, domestic violence expert extraordinaire with over 30 years’ experience, is giving battered women a black eye.  She is the star witness for the defense, brought in to convince a jury that Jodi Arias, who admits to the brutal slaughtering of her ex-boyfriend Travis Alexander, was actually a battered woman—a domestic violence victim.

Bear in mind that this murder was particularly gruesome. Arias stabbed Travis 29 times, one cut an ear-to-ear throat slashing, and for good measure shot him in the face with a handgun.

Other than Ms. Arias’ own testimony after the fact, there is no evidence to support any allegation of domestic violence on the part of Mr. Alexander. There is, however, ample evidence that Jodi Arias stalked Travis, and of course eventually savagely butchered him.

It should come as no surprise that Ms. LaViolette has come under severe criticism. Feminists and “battered women’s advocates” fear that she is doing irreparable harm to their cause.  She is being criticized as a typical defense shill, no different than one of the other expert witnesses for the defense, psychologist Richard Samuels. He attempted to paint Arias as a sympathetic victim who suffered an abusive childhood. Because Arias eventually admitted to the murder only after floating several alternate realities (including one claiming that two ninjas did the deed), the primary goal of the defense is to avoid a murder-1 conviction that could bring the death penalty. 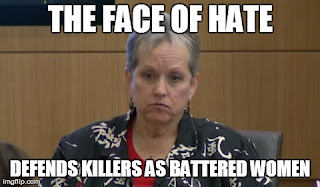 As everyone knows, using behavioral “scientists” of one breed or another in criminal cases is standard operating procedure.  Everyone in the courtroom recognizes these people as hired guns. They are hired only if their analysis bolsters the side’s case. It’s a game. After they lend their expertise in the direct, the opposition attempts to discredit them in the cross-examination.

But it is a big mistake to view Ms. LaViolette through this lens.  She is not just a hired gun who, had she been hired by the prosecution would have testified just as authoritatively on Mr. Alexander’s behalf. There is ample evidence that Travis was afraid of Jodi. Friends warned him that she was dangerous. The state has a much stronger case that Jodi Arias fits the “batterer profile,” someone that could carefully plan and commit the ultimate act of domestic violence, which after all is what this trial is about.

She stalked him. She was obsessed with him. If she couldn’t have him, nobody would. Her behaviors are in line with many of the classic benchmarks of “abuse” defined by the “experts” such as LaViolette—one of which asserts that an “abuser” will eventually kill “his” victim if there is no intervention.

But there is no circumstance that would ever find Ms. LaViolette defending a male victim of domestic violence. In fact, under intense cross-examination she admitted that she had never served as an expert witness on behalf of a man.

But rest assured Alyce LaViolette knows men very well. Most of her employment has been counseling “batterers,” a profitable business these days. Had the prosecutor been on the ball he could have easily discredited LaViolette at jump street by simply asking her about the circumstances of the men in the “batterers groups” that she runs.

Are they all guilty of beating women? Undoubtedly some of them are—but most people don’t understand the legal machinery involved in domestic violence allegations. An accusation of domestic abuse, something routine in a contested divorce involving custody of children, usually results in an “abuse protection” order. Once in place, it requires literally nothing other than a verbal claim to haul the man into court for a criminal prosecution of a technical violation of the abuse protection, or “restraining,” order (which is “civil” in nature when issued, but transforms to criminal when a violation is alleged).

Men are prosecuted for ridiculously innocuous things, such as phoning their child at a day or time not “allowed” by the restraining order; happening to be in the same public place as the “victim,” or even being intentionally invited by the “victim” for the express purpose of entrapment.

Once accused, the punishment often results in probation to avoid a jail sentence if the accused successfully completes a “batterers program.” Besides her forensic career as a domestic violence expert witness, which pays her $300 an hour, this is what LaViolette does. She runs batterer programs for men who have been accused of domestic violence.

Another pertinent question the prosecution could have asked is: Do the men LaViolette treats volunteer for her counseling? Well, in the first place, if they don’t, they go to jail, as it’s a condition for probation.

Once wringing this admission from LaViolette, the prosecutor should have then probed her on the issue of guilt or innocence of the men assigned to her program under threat of jail time. Do they ever claim innocence, i.e., that they were falsely accused?

Well, under the rules of these batterer treatment programs, this can’t happen. In order to be admitted into the program the men have to sign a lengthy document that among other things requires them to confess to committing domestic violence. And of course, if they refuse to sign they violate probation and... go to jail.

This then, is the captive audience for LaViolette’s treatment. If it sounds like something out of Stalin’s Soviet Union, it should. These are, in fact, re-education camps.

Back to LaViolette’s defense of Jodi Arias.

Ms. LaViolette is symptomatic of all domestic violence experts. When confronted with a situation where a woman has abused, battered, or even killed a man, the response is always the same: 1. Deny.  2. Minimize. 3. Excuse.

If this sounds familiar, it should. It’s part of the standard mantra of domestic violence pseudo-science.  It is presented in the canonical literature as the pattern of responses by (always) male perpetrators of domestic violence when confronted. First they deny that it happened. Then they minimize the extent of the abuse, and/or they attempt to excuse it by blaming the victim for doing something to provoke them.

Battered women advocates like LaViolette at first even refused to acknowledge that domestic violence runs both ways. Unbiased research, what little there is, has shown going back to the late seventies that women are at least as likely to initiate domestic violence as men. Eventually they were forced to acknowledge it, as even LaViolette grudgingly did on the stand once or twice. But having been forced to admit that female-on-male domestic violence exists they then resort to... minimizing and excusing it. They claim that the frequency of women abusing men is insignificant , and in the same breath are careful to remind us of why women do what they do... i.e., they rationalize it by claiming that the man was ultimately responsible because of some past actions and behaviors.  They excuse it.

And this is exactly what LaViolette attempted to do on the stand to support the murderess, Jodi Arias.  The only problem is that she is trying to excuse an unbelievably brutal murder using testimony solely from the murderer! Incredibly, in response to a juror’s written question directly putting it to her if the gruesome butchery of Travis Alexander wasn’t the “greater act of domestic violence” than those supposedly committed by Travis as represented to her by Jodi; she actually answered “No.”

Alyce LaViolette, with her 20-page CV, and her 30-some-odd years in the field, is not an aberration. She is the face of victim-feminism, of a worldview that has indoctrinated two generations of women and men into believing that relationships between men and women are based on power and control, rather than love and reciprocity.

It is no secret that many of the women in this arena have evolved into lifestyles that exclude men from their beds. It is no secret that the majority of lesbianism is the product of learned, adaptive behavior. To believe that women who suffer bad marriages and turn into man-hating harridans (often disguised as compassionate, well-meaning, learned “educators”) and “discover” a latent sexual preference for women that was actually innate, is almost as absurd as believing that incarcerated men who turn to homosexuality were born that way but just required the right environment to discover their true sexual appetites.

Quite frankly, the notion that women—or men—who are incapable of having intimate relations with the opposite sex are gainfully employed as experts presiding over any aspect of male-female relationships should give pause to any rational person. Surely, it’s time to recognize that the inmates have been given the keys to the asylum.

Alyce LaViolette defending Jodi Arias as a victim of domestic violence is Exhibit A of the corruption of the behavioral sciences. I won’t say that psychobabbling behavioral experts have no place in the courtroom... they do: as criminal defendants.

It’s time to take the keys back.