Book Review: The Art of Living Forever, by Pierce Timberlake

Pierce Timberlake has written a wonderful and thought provoking short book ruminating on the ultimate questions of life and death.  “The Art of Living Forever” dissects various established philosophies on how best to live this wonderful and mysterious thing we call “life,” and then subtly and logically leads us to a plausible rationale for the current popular notion that what we perceive as existence may actually be a turbocharged virtual reality game.

Timberlake’s meditations begin with observations one day at his job as a telemetry technician in a hospital observing the CRT screens displaying the heart signals of several patients. One of them is experiencing his last moments. The patient’s acknowledgment that he is ready for “the big show” stimulates Timberlake’s own thoughts on the Big Question.

He starts by questioning the (seemingly) inherent unfairness of death itself. This leads to the question of how best to use the time we have before arriving in that last hospital bed. He cleverly dissects the incongruities inherent in “living for the moment,” taking the time to correct the common misconception of Epicureanism while comparing it with hedonism, and then contrasting both with stoicism and altruism, living for others. Finally, he explores the common notion of “life is for learning.” 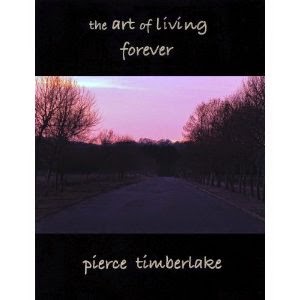 Timberlake writes with a dry sense of humor while displaying a sparkling wit as evidenced in this passage on altruism:

“Altruism: fulfilling yourself through service to others
“One standard of conventional wisdom is that we find meaning in our lives by living for others. I’ve heard this in some form since I was very young, and have generally bought into it. Even as a child, though, one question bothered me: If I live for others, who do they live for? Do they live for some third party, who in turn lives for someone else, and so on, going around in a daisy chain until it finally comes back to me? It would seem to be more efficient if everyone just lived for themselves. Living for each other sounds friendlier, but it would be more straightforward if we each took care of our own situations. After all, who knows what you want and need better than you do?”

Man’s belief systems on the big picture, what it all means, cannot rightly be separated from the state of his technology and understanding of the physical universe. Presently, a new explanation of the Big Picture has emerged that reflects the digital revolution. Timberlake speculates on a perfect future where human ambitions have been fully realized and even immortality become possible. What this would mean for the human condition eventually leads us to the fanciful notion that our experience of reality is actually software, within a huge virtual reality game existing in cyberspace. This new reality paradigm would not have been possible before the advent of the computer. It has been popularized in science fiction, most notably with the “The Matrix” movies, and intelligently explored in the TV show “Caprica,” the “Battlestar Galactica” (remake) spinoff.

Timberlake incrementally, and ingeniously, leads us to how such a “world” could evolve from a highly intelligent, technologically advanced species. Step by step, he reveals how a life such as we all experience, with no knowledge of the higher reality and no memory of past life excursions into the “Game,” is the logical outcome.

Assume immortality is medically and technologically achievable, how long would it take for boredom to take its toll? It can be argued that once we have reproduced, had children, Nature is done with us. We have served our purpose. Once one reaches a certain age, and has children, this can come to feel intrinsically, and painfully, true. Certainly our aging bodies behave in this way. At a ripe old age, observation of family members who inevitably pass away, usually—or at least, often—confirms that at our expiration date we are ready for death. We, with resignation, understand that there is really nothing left for us to “do.”

If it were possible to “reboot” our consciousness (mental capacities?) into a new body, how many would choose to do so? In the cyber-reality “Game” scenario, those who do so would eventually realize that the ennui could only be overcome if any memory of our previous existence (both the “real” as well as our cyber-reality “avatar” lives) were hidden from us.

This scenario so neatly fits the Hindu concept of reincarnation that it can’t be ignored. A question arises: Does this similarity with an existing religious worldview make it a more, or less, plausible picture of “reality”?  That depends on the individual, and their existing beliefs.

For me, there is a fundamental flaw in the concept of reincarnation. The notion of a wheel of repeated lives requires an absolute framework within which these lives occur: a constant, universal flow of time. But not only do we know from Einstein that no such thing as absolute time exists, we can reject it on the basis of two other lines of reasoning:

(1) On an epistemological basis, namely that our perception of time is a result of our physical bodies and our senses, and as such it is not provable that time represents anything “real.”

Nonetheless, the “Game” scenario is an intriguing thought experiment, if nothing else, and makes at least as much sense as the various other theories of the afterlife believed by billions of people.
***

Epicurus, Marcus Aurelius, Nietzsche, William Blake, Descartes and Plato all make guest appearances as either authors or exponents of various philosophical schools of thought or important contributors to the grand discussion of the human condition throughout the ages.

Other than Zen and the reincarnation aspects of Hinduism, religion gets small mention. This book is not about rote belief in a prescribed set of explanations for life and the afterlife. Timberlake acknowledges that a more comprehensive treatment, including religious thought, would require another, different book.

Timberlake writes with humanity and gentle wit in a voice that doesn’t preach or condescend, guiding the reader with reason, humility and honesty through his landscape of ideas on the ultimate questions. He has three other titles that followed “The Art of Living Forever,” they are:

“Sex, Not-Sex, and Love,” “Should You Study a Martial Art?” and, “Style as Ideology / Ideology as Style.”  They are all available on Amazon for the kindle, and I look forward to reading them.