Chaos Theory in a Tokyo Bar, by Pierce Timberlake

With Chaos Theory in a Tokyo Bar, Pierce Timberlake uses a past event, an evening in a bar in Tokyo, as his launching point into another of his sublime meditations on the human condition.

The topic this time is the psychology of risk. Timberlake’s fictional alter-ego Thomas finds himself at age twenty in Tokyo visiting his parents, where his military father is deployed.  The impetus for his first foray into the nature of risk is a young soldier who more-or-less invites himself to their table. 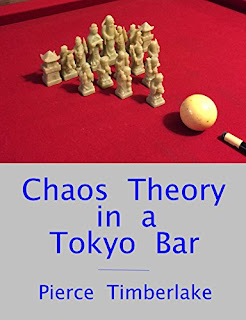 The young GI is gung-ho to get to Vietnam, “where the action is.” Thus begins Timberlake’s first analysis of the human propensity to engage in risk.  Does a young man’s sense of invincibility merely stem from the seeming unreality of death, as its natural occurrence is so far in the future that its acknowledgement can’t find purchase in the mind?  Or is there more to it?

Timberlake springs backwards and forwards in time from the Tokyo bar to visit other moments in Thomas’s life when he confronted fear and took the road of recklessness.

There’s the ten-year-old Thomas who decides to swim off the northern California coast and may have encountered a shark. There’s the slightly older motorcycle-riding Thomas who takes up the gauntlet thrown down by a passel of teenagers in a Mustang on a dangerous 2-lane coastal road. Several other instances are recounted, each one leading into a further exploration of why people take chances with their lives.

The list of causes builds with each story. In his words:
“To the factors Thomas had previously considered that he thought could lead an individual into reckless behavior—egotistical paralysis that won’t allow you to deviate from a course once you’ve taken it; acclimation, when a minor risk increases gradually; social pressure—Thomas could add a fourth:  a tendency toward solipsism.”

Readers of Timberlake know that his philosophical excursions always lead into mind-bending spaces. Is the many-worlds theory of quantum uncertainty an expression of chaos theory writ loud across the multiverse? Is it possible than in near-death circumstances reality branches into universes where we do actually die, but then our consciousness transfers to an alternate universe where we continue our lives?

What then about the multiverse? An infinite number of universes, a new one created with each quantum event’s collapse of its wave equation.  Such an increase in size of the “world” (after all, we can’t just use plain old pedestrian “universe” to describe this reality) is beyond human imagining. We have no hope of appreciating the size of such a beast.

Perhaps it is at this point that solipsism enters the picture. As our minds employ the scientific method to ever greater advances, refining and periodically overthrowing past scientific paradigms, we are forced to entertain the notion that perhaps we are not really perceiving the world (with ever greater accuracy) as much as we are actually conceiving the world.

This last cause of recklessness, solipsism, is further illustrated by what I found to be the most engaging part of the book: the account of Thomas’ off-and-on employment by the larger-than-life “Alan,” a truly colorful character.  Emerald smuggler? Drug smuggler? Hi-roller gambler. Perhaps bullshit artist. Probably all of the above in various measures, Thomas concludes.

Being myself relatively risk-averse, I find myself drawn to stories about those people at the opposite end of that spectrum. I recall being fascinated listening to a Vegas gambler on an NPR program recount a couple of days in his life in the casinos. It is inconceivable to me that someone could possess several hundred thousand dollars resulting from a good day’s gambling, and then under no coercion whatsoever lose it all the next day. This kind of behavior is not just anathema to me, it’s totally alien.

In one of Thomas’s excursions with Alan, his employer enters into a casino game called “Bank Bingo” in a bar in Panama. This is the quintessential story of the sucker lured into losing everything in a game where he is clearly being duped. They were not even familiar with this game. They “learned” it on the spot. I’m a sucker for harrowing tales of gamblers in the throes of losing yet unable to quit the game.

For the reader’s sake I won’t reveal how Alan’s “tryst” with Bank Bingo ends...

Timberlake’s last speculation is on Alan’s psychological makeup—what is it that drives people like him to take huge risks, to slough off hundred-thousand-dollar losses with just a wry remark? Perhaps it is a tendency to solipsism: the belief (not disprovable, by the way) that only YOU are real. Everything else, including all other people, is but a show for your benefit. Only you “exist” in the ultimate sense.  If solipsism is buried deep into your psyche, then your behavior ultimately doesn’t matter. Risky behaviors would be par for the course for such people.

Chaos Theory in a Tokyo Bar is a fine work. I look forward to more from Timberlake.