“Every record has been destroyed or falsified, every book rewritten, every picture has been repainted, every statue and street building has been renamed, every date has been altered. And the process is continuing day by day and minute by minute. History has stopped. Nothing exists except an endless present in which the Party is always right.”

Since Trump had the audacity to mention that the “other side” at Charlottesville was “also very violent,” he’s accused of implying a moral equivalence between the white nationalists protesting the removal of Civil War monuments and the protesters that greeted them with clubs and rocks. He is guilty of the capital crime of “insufficient condemnation of Nazis.”

Politicians and political pundits elbow their way to the public square to proclaim their loathing for Nazism, denounce Trump, and prove their fidelity to the herd.

Perhaps to preserve this moment of mutual admiration for our moral purity we should declare a new national holiday ... to ensure that “Never again will there be another Charlottesville”? 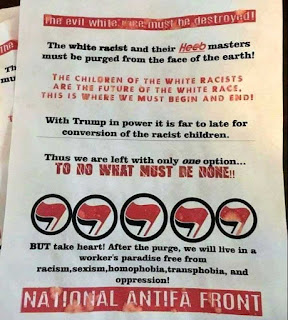 How dare President Trump imply a moral equivalence between Antifa and Black Lives Matter and... Nazism?

Granted, the Unite the Right rally did include bona fide racists chanting anti-Semitic slogans, replete with their silly flags and regalia. But what kind of actual threat is really posed by the KKK and neo-Nazis today? The last neo-Nazi rally I remember hearing about occurred in 1978 in Skokie, Illinois. It was only newsworthy because they were defended by the ACLU. Alright, so maybe just because they average two marches every 39 years, maybe that’s ‘cause they wield so much power in the institutions of government, academia, the media, and the entertainment industry that they don’t need to hold rallies. Or maybe their real power is hidden—the nefarious man behind the curtain—pulling the strings of the dupes in government and industry, anxiously awaiting that “Order 666” signal to be given so they can dispense with the charade and take the reins of power.

Or maybe they are a tiny minority of ineffectual clowns, with no power anywhere but in their own “castles,” mutually reinforcing their own illusions with their secret handshakes at their secret meetings.

Where is the rabid gang of Young Republicans shutting down a university to protest a speaking engagement by a transgender rights activist?  Where are the Hollywood awards celebrating movies that criticize sexual deviancy, Islam, or the appalling degree of violence in black communities? Where are the calls for the extinction of the black race?

In case you’ve been living on Pluto for the past few years, these scenarios all have real-life analogues, but with left and right-wing antagonists reversed.

Back to that “moral equivalency.”  Racism and discrimination (under the law) are unquestionably un-American. But, it hasn’t always been so. In 1787 not only was slavery legal, but the voting franchise was restricted not just to men, but to men who owned property.  So when we call things “un-American” we have to be careful to qualify what we say to account for the evolution of our values and laws over time.

What about the “other guys”—meaning Antifa and Black Lives Matter? Let’s measure how consistent their values are with American principles.

These groups both have a track record. There is no uncertainty about what they do. For the past two-plus years the antics of these groups have been plastered across the news—for those willing to watch. Antifa has been the main instigator of the various riots at several college campuses. They embrace violence as a legitimate tool.

Antifa haven’t been protesting actual Nazis or even so-called white nationalists. They have been disrupting the speaking engagements of conservatives who have the audacity to challenge their worldview. People such as Milo Yiannopoulos, Ann Coulter, Ben Shapiro, and the criminology scholar Heather MacDonald. None of these people advocate for white nationalism, let alone Nazism. They simply disagree with the standard victim-feminism, black-victimization and Islam-is-the-religion-of-peace narratives. And it goes without saying that given the opportunity each of them handily destroys those tropes, which is why they have to be silenced.

So what exactly does Antifa oppose?  It opposes the very concept of the US as a sovereign nation. One of its slogans is “No nations, no borders, fuck deportation.” That’s why they’re often called anarchists. But that’s not all that’s on their short list. They oppose free speech—freedom of thought itself. And free speech is foundational to what is considered “American.” It’s enshrined as the first of the amendments in the Bill of Rights. It takes a back seat to no other freedom. It is the fundamental liberty, without which all others are meaningless (apologies to Second-Amendmenters).

So, quite frankly, there is no moral equivalence between racism and the threat posed by Antifa. Antifa stands in violent opposition to foundational American values. Antifa is the greater threat. It is by far the greater evil.

With respect to Black Lives Matter, that other equally violent pillar of the Left’s “Resist” movement, they stand accused of the very thing they ostensibly oppose: racism. They hate whites, the cancer of the human race, who need to apologize for their whiteness and pay reparations for their crimes. Borrowing the “privilege” meme from that brilliant victim-feminist thought contagion “male privilege,” whites are ordered to “own their white privilege” and denounce it.

This latest incarnation of black empowerment calls for segregation—in college dorms, graduation commencements, and now even in college freshman orientations. BLM has openly called for the killing of cops (“Pigs in a blanket, fry ‘em like bacon”), and the call is heard and answered. Sixty-four cops targeted and killed for being cops last year. Blacks are taking “community solutions for restorative justice” into their own hands.

BLM have also been instrumental in the disruptions of conservative guest speakers on the campus. They too, openly flaunt their rejection of free speech—for whites.

And what power is wielded by these left-wing groups? Are they impotent, like the white nationalists? Hardly. Local authorities and college administrators alike cower in compliance to BLM demands. Hollywood lionizes them. Politicians step aside to give them their podiums. The mainstream media bends over backwards to avoid criticizing them. It’s deny, minimize, then rationalize. And remember, the news correction that comes later (if at all) is quickly forgotten while the original “errors” live on as long as they lend credence to the narrative. And there is no correction for that most powerful of journalistic biases: omission. Just don’t report it. So while Fareed Zakaria refers to ISIS terrorists as “warriors,” the media put “Free Speech” in quotes when reporting on the Boston Free Speech Rally the weekend after Charlottesville (despite the fact that the organizers distanced themselves from white nationalism and invited speakers from both the Left—“true liberals”—and Right).

Since the Trump campaign began in June 2015, the Academy has made a mockery of free speech. How ironic that the birthplace of the Free Speech movement in the sixties, UC Berkeley, was the scene of the worst protest of them all earlier this year when Antifa, BLM and other barbarians successfully prevented Milo Yiannopoulos from speaking. Chanting “Hate speech is not free speech,” they set fires, threw Molotov cocktails and smashed windows at the Student Union building where the Breitbart editor was scheduled to speak. Not confining their “protest” to the campus, they also vandalized shops off-campus.


And since “domestic terrorism” has been brought into the conversation...

Violence and threats of violence against civilians?
Check.

... with a political objective?
Yes.

Can you be more specific?
Sure. Conservatives are targeted with violence to make people afraid of expressing their opinions if they aren’t in agreement with the politically correct “progressive” positions of the Left.

There is no question as to which of the two sides in the “battle for Charlottesville” is the most dangerous and poses the greater threat to the Republic. On the one hand is a group chanting “The Jews will not replace us,” who have no support in any segment of society—and on the other we have the mob. The barbarians who proudly proclaim their intolerance for any viewpoints that challenge their militant left-wing orthodoxy. The faithful zealots who fan the flames of racial animosity and openly embrace violence to silence any “infidels.” And yet it is these who are sanitized by the media and enjoy popular support.

The great danger is that the mob has the approval of the media, academia, Hollywood... all the institutions of society that frame the issues and shape public opinion. Who stands against them? Apparently only the alt-right.