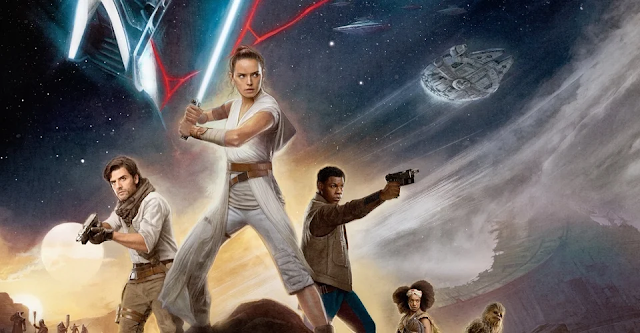 Haters gonna hate. The bros are all hurling their rotten tomatoes at the last installment of the Star Wars franchise because they can’t handle a female Jedi warrior in the title role. I get it.

Okay, they have some valid points about the complicated storyline and a few plot holes here and there. Heck, I got confused a bit, too. I have to see it again to fully understand how Darkseid’s final solution to the Anti-Life equation was supposed to destroy the midichlorians, bringing balance to the Source. I still don’t get how all those thetans were supposed to join into Rey—or was it into Sidius?... I’m still not sure. And I admit it is a little puzzling how the first two movies in the trilogy set up this Snokes character as the chief bad guy—but it turns out he was just created by the evil Xenu, who didn’t really die in Episode VI: Return of the Jedi, last of the original trilogy.

Come to think of it, this thing about characters dying... and then coming back to life... there was kind of lot of that. It was kind of unexpected—and not in a good way—when Kylo Ren murdered Han Solo, his dad, in cold blood in the first of the new trilogy, Episode VII: The Force Awakens. But even though Han Solo isn’t a Jedi, it was necessary to call a do-over in what was I admit a very unpopular and ...okay... dumb move, by having him come back as a pseudo-ghost and have the proper resolution with his son. Sure, that’s a little confusing and awkward—being as the concept of Force ghosts was something that was only meant for Jedi Masters or Sith Lords—but he wasn’t really there, it was just in Kylo Ren’s mind... or something. Hey, you gotta break some eggs to make an omelette, right?

I admit that having a protagonist dealt a death blow, and then dramatically regaining the breath of life after many agonizing moments is a movie trope as old as cinema itself, but how many times can you do this without having it lose its impact? I was waiting to see if Xena was going to return the favor to Kylo Ren, wondering, how many times can you do this with the Force?

The bros trying to diminish the success of this worthy conclusion to George Lucas original vision with all their hate are not gonna succeed. Trying to say that Bob Iger blew it from the get-go by demanding that the last trilogy copy all of the successful devices of the first trilogy with Luke, Han and Leia is stupid. And they’re equally stupid in claiming that Kathleen Kennedy, producer in charge of the franchise, ruined it by insisting that the “Force is female!” satisfy feminist and multicultural edicts. After all, look how she compromised her original vision of having Rey be a Source demi-goddess! (Is “goddess” still a word, or is it just “god”... it gets so confusing.) ...And their charge that JJ Abrams bears the chief blame because... he’s JJ Abrams and has no clue as to what Star Wars is really about... well, it’s all ridiculous. Abrams had a tough job, being that after his work on Force Awakens they had some legitimate course corrections that needed to be made. And just because they brought in Rian Johnson to direct who made a good-faith effort, Jar Jar Abrams still needed to make further course corrections in Rise of Xena.

Look, it’s not the first time that a movie trilogy had to be rethought on the fly during production. There’s ... uh.. okay I can’t think of an example right now, but that’s what happens when you’re working with canonical fiction. You have to be careful what you do. Imagine what the trilogy would’ve been like if they stuck with George Lucas’s original story outline? It would’ve been only about the Skywalker bloodline. That’s boring.

They say you shouldn’t throw good money after bad, but don’t they also say that if you’re in a hole the first thing you need to do is stop digging? Stop the hate and enjoy a great movie with a great cast of characters that actually looks like real America, an inclusive America, with a strong woman in the lead role.